You know your quiet friend? That one that hangs out, but doesn’t say too much, but just when you start wondering why they haven’t spoken they say something hilarious that reminds you why you are friends. Weird comparison maybe, but this is how I feel about Bridgetown Menace. You’re never sure what they’ve been up to, or if they’ll be able to handle the bout you’re about to watch. And then when they step onto the track, you’re reminded: “Holy sh*t, these guys don’t f**k around.” I also think, “Wow. Look at those beards.” 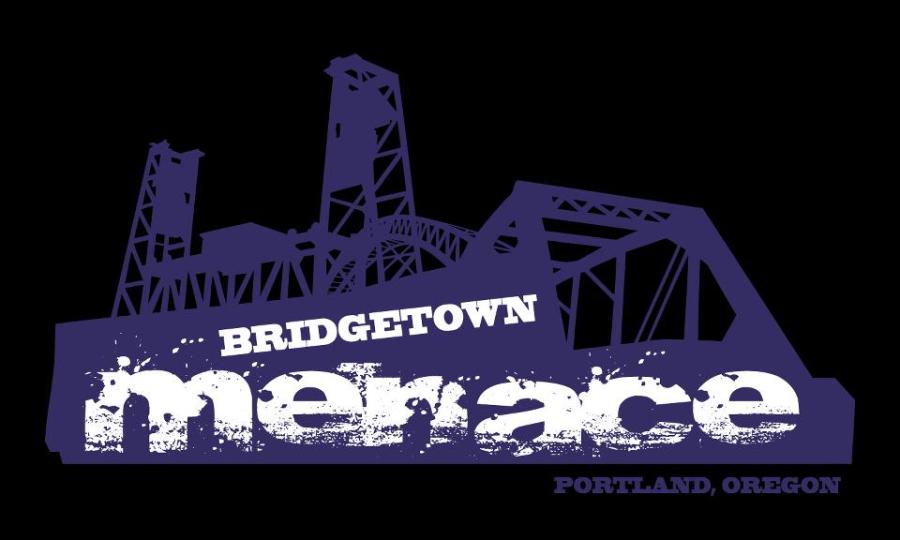 I first saw Bridgetown play at Spring Roll 2013, and fell in love with their hard hitting style of smash ‘em up roller derby. Every Menace player skates like they’re 6’2” and 220 pounds of pure muscle and agility. They made a very good showing at Champs last year, muscling through opponents and letting Shreddy Mercury dance around the opposition. You could tell their wall work needed some time, and that there were some overall trust issues on the floor that did not play to their advantage against Puget in the 5th place game.

I was super stoked to see Bridgetown play live again. I am a fan, it’s absolutely true. Cozmo Damage is a monster blocker who always seems to be one step ahead of the jammer, Juke Blocks Hero is a force of reckoning in a pack, and Don Juan the Devaskater is just pure fun to watch with his power-jam skating maneuvers (he and No Big Deal of Maelstrom have a very similar strength-jam style).

What I had noticed in their bouts against the GateKeepers and NYSE is that their teamwork and trust has increased unbelievably since the last time I saw them play. They always had good teamwork, but they actually seemed to move as one unit in their fluid diamonds. Also, I was reminded of HOW HARD AND FAST AND SHARP every skater on the team is. Her-man Munster said of Menace’s experience at RC:

Having a packed audience of people who are all derby literate is the best live experience you could ask for. It’s awesome knowing that the RC volunteers are turning people away at the door because they can’t fit any more people in that room. It was a good thing for men’s derby because so many people got to witness some really competitive match ups. It was a good opportunity for people who might not normally watch men’s bouts to see how great it can be at a high level.  Playing against the #2 and #3 teams as the #6 team is a win-win situation. We have nothing to lose there, and get a chance to see where we fall against the best teams. It’s a bonus that we get to play against people that we like. It was great to feel where we excelled and nice to have St Louis exploit a weakness with a couple months to fix it. The timing of those competitive bouts were invaluable in preparing for Champs.

For me. jammer Elysium made a huge impression with his maneuverability and endurance in both bouts. He was able to crack walls and twist around the super-strength of the GateKeepers. Rob Lobster, who had only recently returned to derby, looked like he hadn’t been out on injury at all (much less something draining like chemotherapy). His non-verbal communication and trust in his teammates meant that when a wall had him in it, the opposing jammers had to work much harder. Side note: Rob’s actually receiving chemo treatment THIS WEEK, and will still play at Champs this weekend. For more info on all of that, please go and join the #TeamLobster Facebook group and then visit Left Turn Clothing to order Team Lobster shirts.

The first round of Championships finds Bridgetown facing an old friend: Puget Sound Outcast Derby. Like NYSE and Maelstrom on the east coast, Menace and the Outcasts have found themselves toeing up several times a season for a few years. This year these two met at the Big O and at the Rat’s Nest, after having finished the season 2013 in the battle for 5th place at MRDA Championships.

Bridgetown Menace is hungry. Many of their skaters have only been playing derby for two or three years, so each time they come out to play, they learn more about themselves and their teammates. Each time they face off against a stronger opponent, they leave the other team gasping for air and showing off new bruises. This time at Champs, we could see the little brother finally win. For new fans of men’s derby, or if you haven’t seen the team play before, Munster says there are some you should look out for:

Shreddy Mercury is the first. He’s absolutely one of the best jammers in Roller Derby. I believe Cozmo Damage has elevated to an all-American blocking level. He has some of the best blocking technique in men’s derby. Sam Miller of course is always so fun to watch. He has a style unlike anybody else, and makes our team very dynamic.Some other fan favorites are Juke Blocks Hero and Demolition Man. So much charisma there. However, the real star of our team is our teamwork. If there is any reason to be a fan of Menace, it is the way we play together. I think we have the strongest team-play among the top teams.

Check out the Bridgetown Menace facebook to keep up to date with them, and to request to buy some of the merch that they are (apparently) going to be selling hella cheap this weekend at Champs!! If you’re not going to be at the Tacoma Armory for the event, make sure you tune into WFTDA.tv at 3p PST to watch the epic battle between Bridgetown and Puget Sound!

Thank you to photographers Brangwyn Jones, Masonite Burn Photography, and Shutter Up – Joel Glitner Photography for the photos used in this blog! And thank you Her-Man Munster for sending me some gem photos (Cozmo, Shreddy – you have him to blame.)